Just scraping into the Craft Barn Twelve Month Challenge yet again. I had no idea where I was going with September's verse from the poem "The Months" and it probably shows! The verse reads "Warm September brings the fruit. Sportsmen then begin to shoot."

I didn't have a choice of fruit stamps so it had to be the only one I possess - a pear. I rather ignored the second line and just added some small ducks in flight hoping they escaped the gun. Slightly hypocritical on my part as I do eat game.

The pear was also stamped on a piece of card, cut out and coloured with watercolour pencils, blending the colours with water and then a little bit of blush added using Barn Door DI. It looked a little dull against the background so I painted it over with several layers of PaperArtsy Gloss Glaze. I finished the page by adding the computer generated verse. 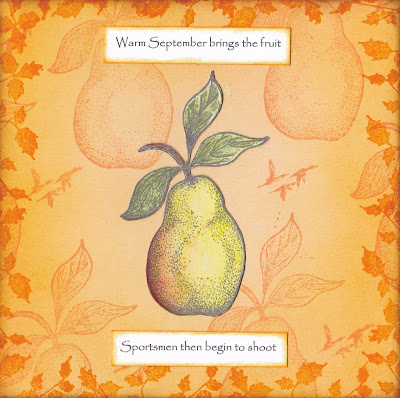 I love all different layers and colours. And the focal point, the pear, is perfect. Well done!

Maggie
from England
I'm retired now so I can spend even more time on craft projects. This way I can still avoid the duster unless absolutely necessary! 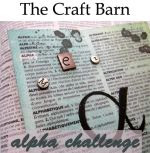